Saint Mark's Most Serene Republic
READ AS A PDF

Venice is a city seemingly built from the sea in northeastern Italy, but it is really built on small islands with wooden reinforcements, separated by canals and connected by bridges. The city is currently one of the world’s most famous tourist attractions, owing to its unique urban design, opulent architecture, and fascinating culture. 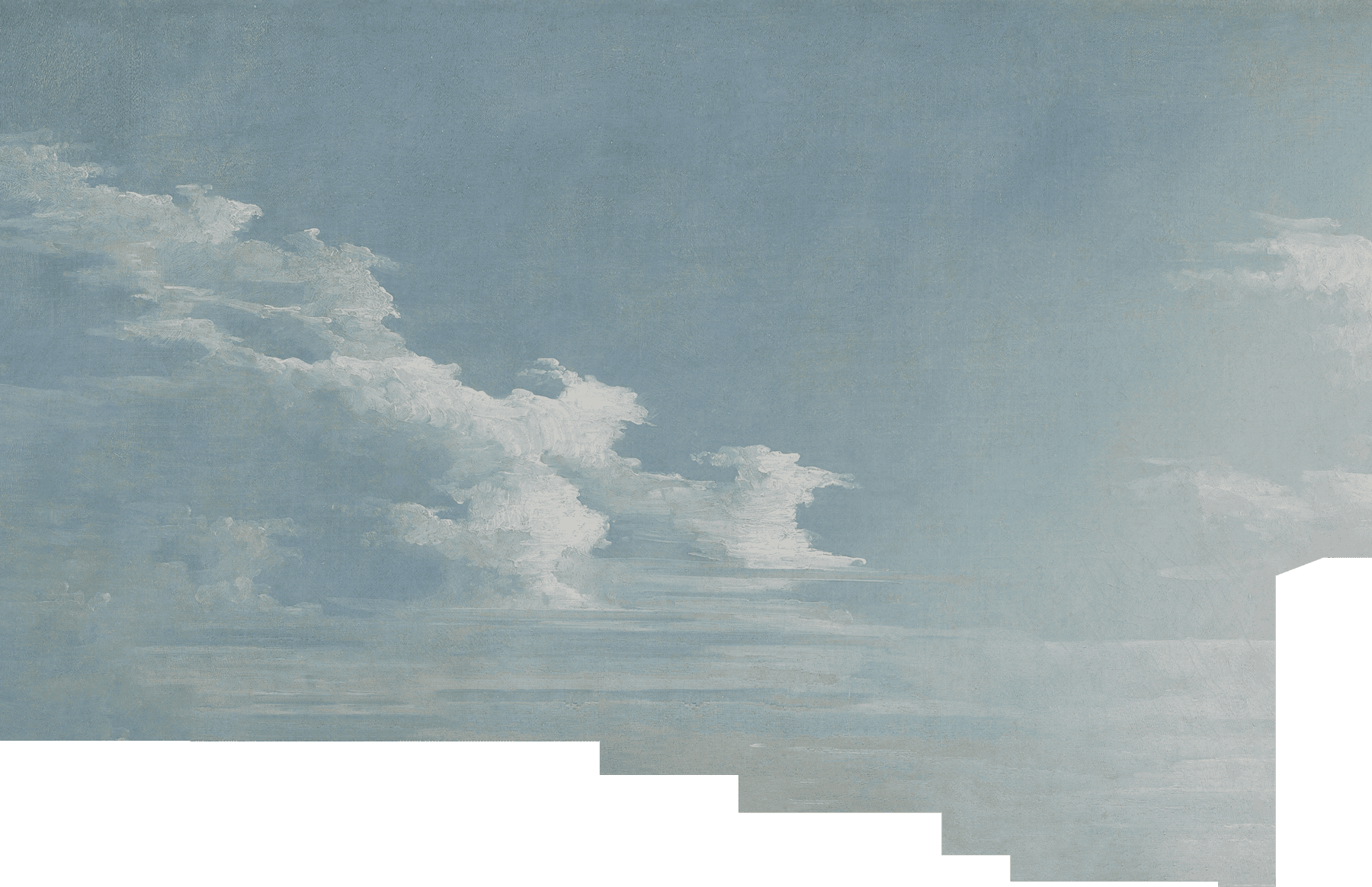 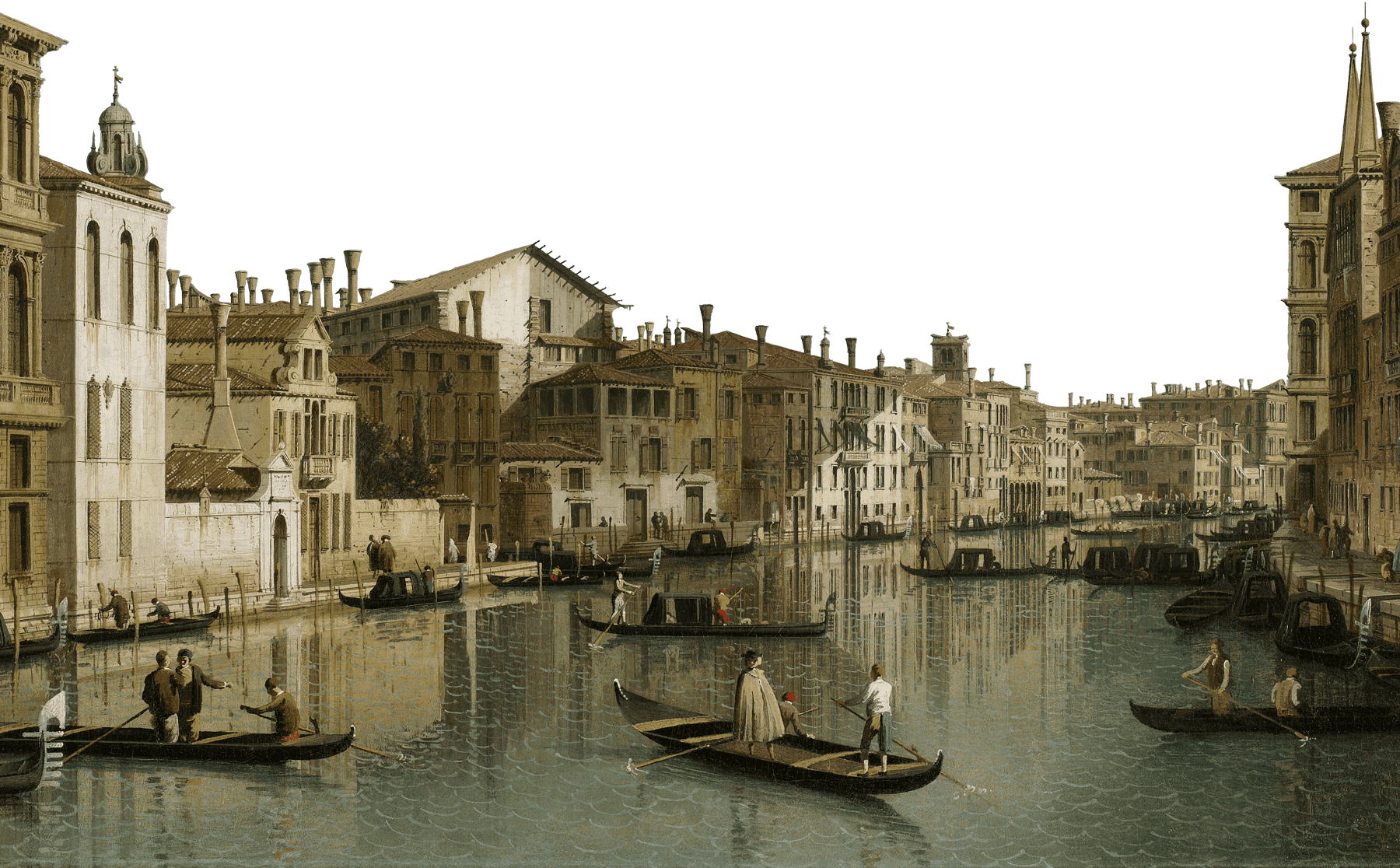 The Grand Canal in Venice from Palazzo Flangini to Campo San Marcuola, circa 1740
Giovanni Antonio CanalOil on canvas
Minneapolis Institute of Art

Painted from a vantage point near the present-day railroad station, this placid scene shows where the Grand Canal in Venice begins to curve toward the east. Many of the palaces and monuments pictured here still stand, including the Palazzo Flangini (the first building in the left foreground) and the adjacent Scuola dei Morti.

Venice has always been more than just a city of commerce and canals. It was home to some of Renaissance Italy’s greatest works. The city’s beauty and rich patrons drew many artists to come and live there, which had the effect of inspiring many playwrights and authors to create works of art about Venice.

Hogenberg illustrated this map of Venice for his book “Civitates Orbis Terrarum,” a collaboration with his son Abraham and Georg Braun, in 1572. This collection of maps, spanning all of Europe, is the most important book of town plans and views published in the 16th century.

Venice’s unique location at the cultural crossroads of the northern Adriatic Sea resulted in some cultural eccentricities. For example, the Carnival of Venice is held annually in the city, during which up to 3 million people roam the streets wearing elaborate masks, expressly intended to keep the wearer anonymous. Glasswork is another artistic tradition of the city, and the place became known for the exquisite coloring, artisanship, and quality of its products. 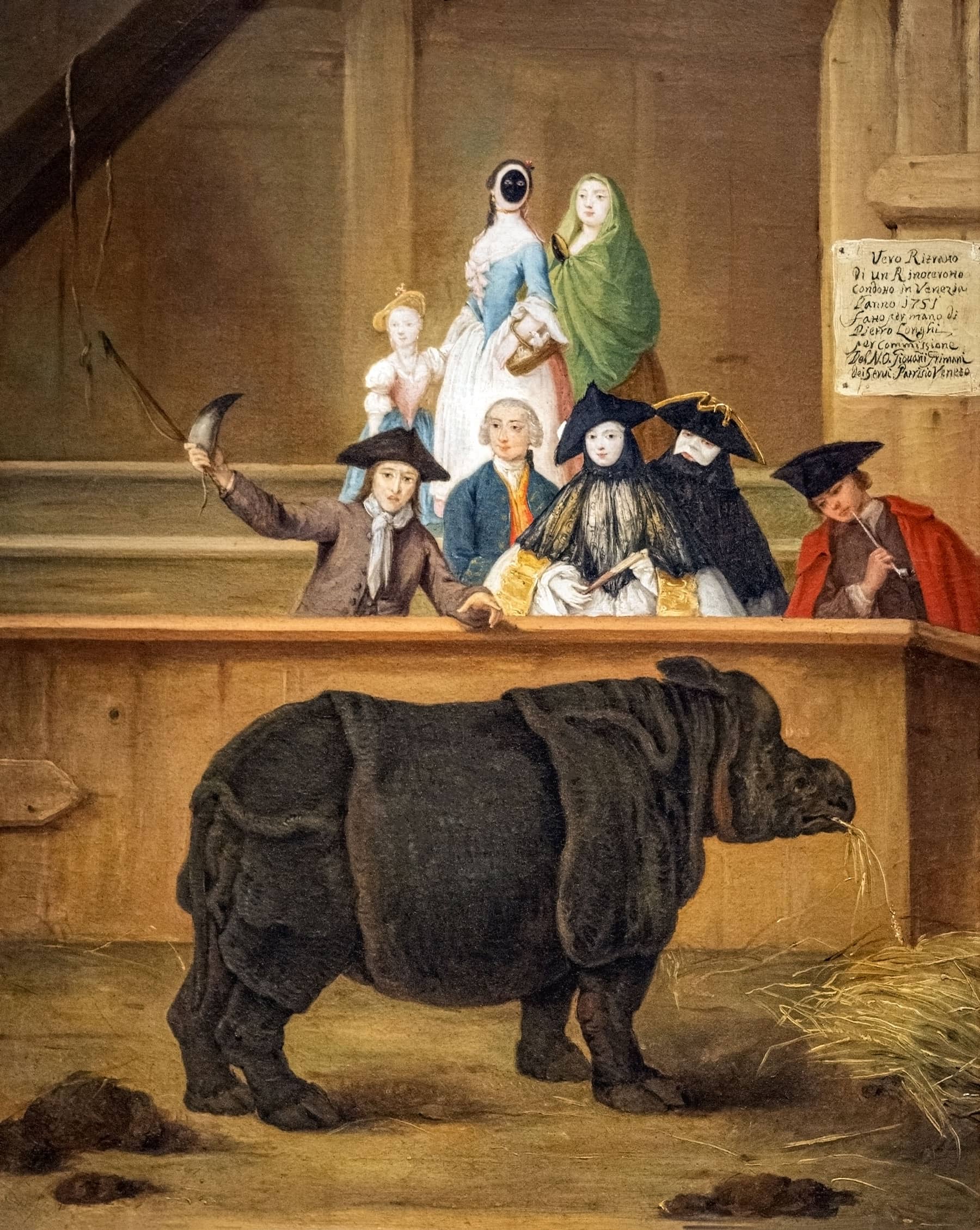 Throughout the Venetian carnival, which lasted a full three months, curious and varied vendors occupied the booths set up in St. Mark’s area: puppeteers, magicians, astrologers, charlatans, and, among the major attractions, there were also exotic animal menageries that held lions, elephants and, in this case, the rhinoceros Clara, depicted here.
‍
Also seen in this painting is ‘La Moretta,’ one of women’s favorite disguises for the Venetian carnival. It consisted of a small oval mask made of dark velvet, usually worn with a hat and embellished with veils. Those who wore the Moretta mask could not speak as they had to hold a small button in their mouth to keep it in place. This wedded especially well with the spirit of the Venice Carnival as women were able to maintain total anonymity and engage in all sorts of prohibited play.

Over centuries, the city transformed from a small number of houses for fishermen and salt workers to the metaphorical center of the Mediterranean. As arts and commerce flourished, so too did the city.
This flourishing led to there being a number of architectural and artistic treasures in the city. These include the Doge’s Palace, the Marciana Library, Saint Mark’s Basilica, and the Venetian Arsenal, all of which are examples of Venetian Renaissance architecture. The Venetian Gothic style of architecture is also visible across the city as well. 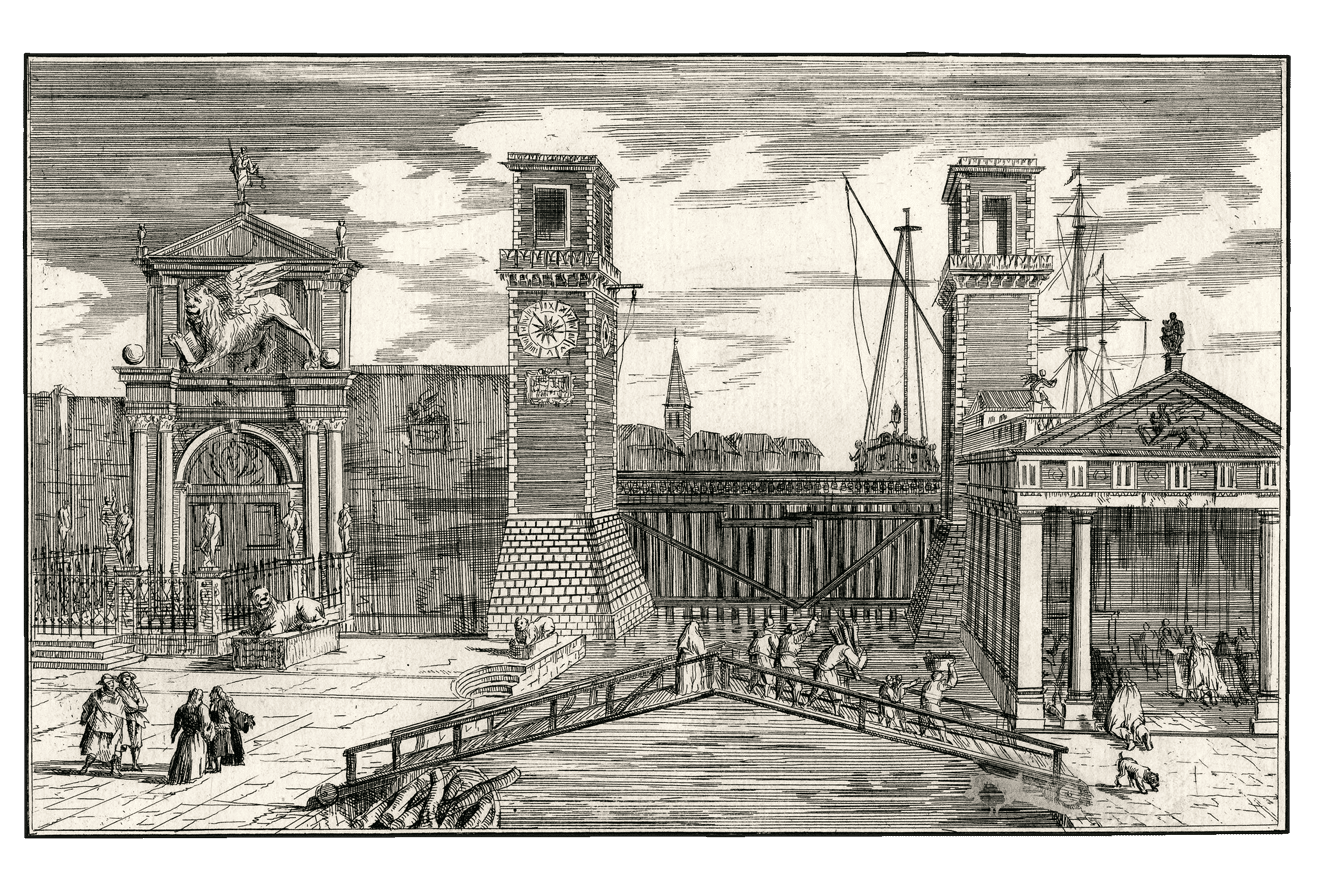 View of the entrance of the Arsenal,
seen from the canal, 1703
Luca Carlevaris
© The Trustees of the British Museum 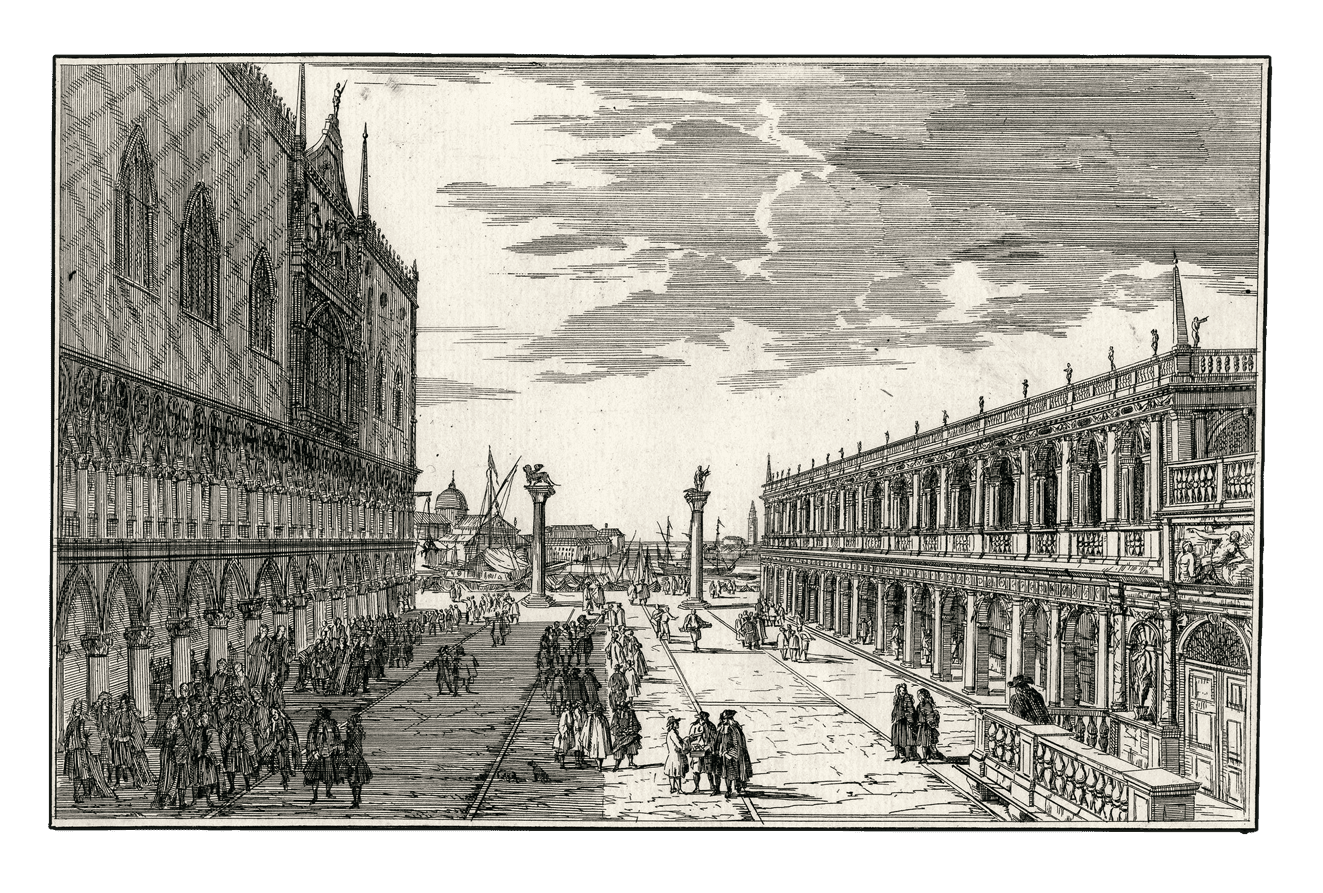 View of St Mark’s square with St Mark’s church at left and the Marciana Library at right, 1703
Luca Carlevaris
© The Trustees of the British Museum

Venice was not simply wealthy, it was a major financial, maritime, and commercial center during the Middle Ages and Renaissance. It is often referred to as the first major international financial center in the world. The city was also a thalassocracy: a powerful regime that’s strength comes from its navy. Its proud sailors warded off piracy throughout its territory, and with its coast protected, trade flourished. Venice used its maritime power and trade acumen to connect western Europe to the rest of the world, and from the 9th to the 17th century, Venetian traders were the primary brokers between the Middle-East and Europe. 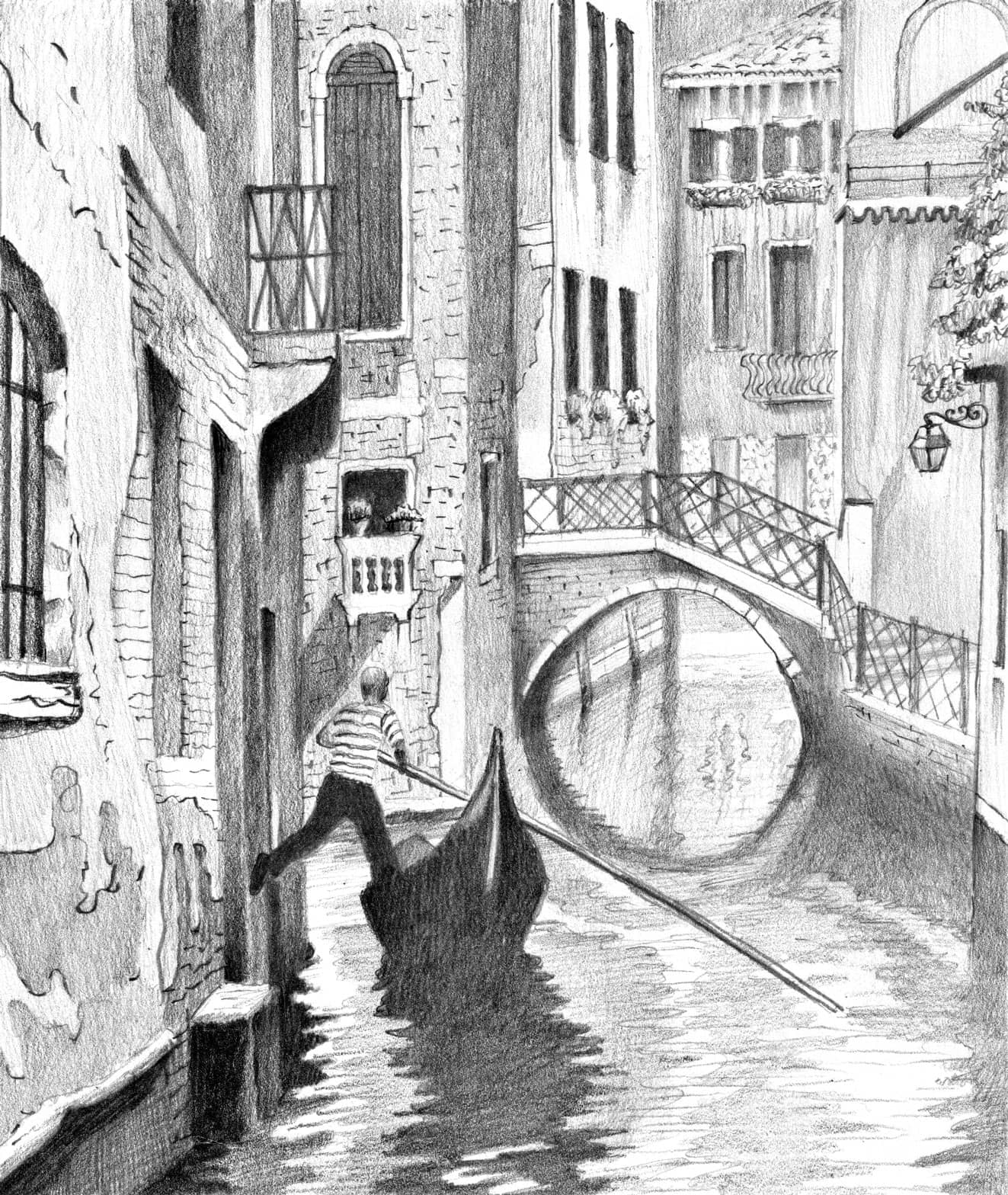 Venice emerged as an independent political entity as the power of the Byzantine Empire waned. Previously caught between the established but slowly dissolving Byzantine Empire and the newly emerging Frankish Empire, these two empires ultimately solved their border dispute with the Pax Nicephori, which was a treaty and series of negotiations that concluded in 814.
‍
While the Venetians asserted that the treaty guaranteed Venice political and juridical independence from the rule of either empire, modern historians doubt that this was so. While the treaty did not confer de jure independence from the Byzantine Empire, it did ultimately lead to Venice’s de facto independence. By 840, the ruler of Venice, known as the Doge, was able to attend to international affairs in Venice’s name. Venice’s wealth, strategic location, and de facto independence helped shape Venice into a thriving city-state. 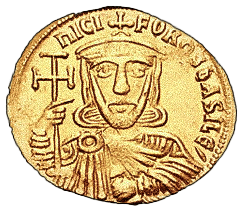 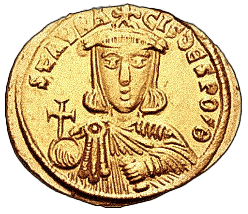 The Doge’s Palace in Venice, also known as Palazzo Ducale, is one of the city’s most iconic landmarks. It’s witnessed centuries of history, and can trace its lineage back to the very foundation of Venice. From the 9th century AD, the region’s most important political decisions were made here.

Initially, the Doge in Venice ruled as an autocrat, but the city soon developed a republic. Under this system, the Doge was required to take an oath of office called the promissione ducale. By making this oath the Doge not only pledged allegiance to the Republic of Venice, but also swore to abide by the limitations on his power that the oath spelled out. These limitations included not being able to open correspondence from foreign powers without other officials present and not being able to own land outside of areas controlled by Venice. 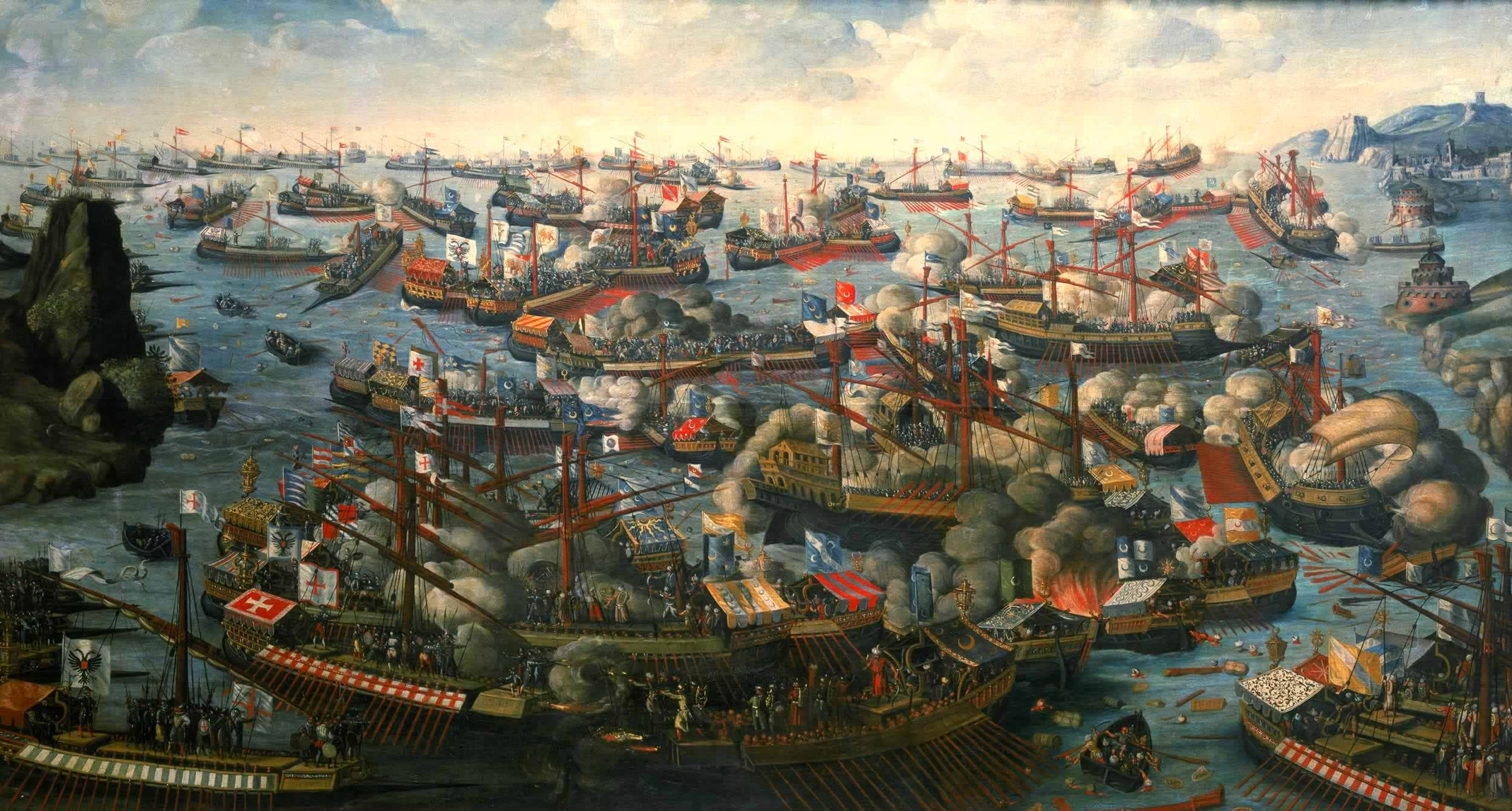 In 1571, the Venetian navy launched a naval attack against Ottoman ports in the Agean Ocean. The purpose of the operation was to disrupt Ottoman naval yards. Thanks to Venice’s early techniques of mass production, it was able to defeat the much larger and more powerful Ottoman Empire. The Battle of Lepanto marks a turning point in history, where mass production becomes as important of a factor in victory as battlefield tactics. 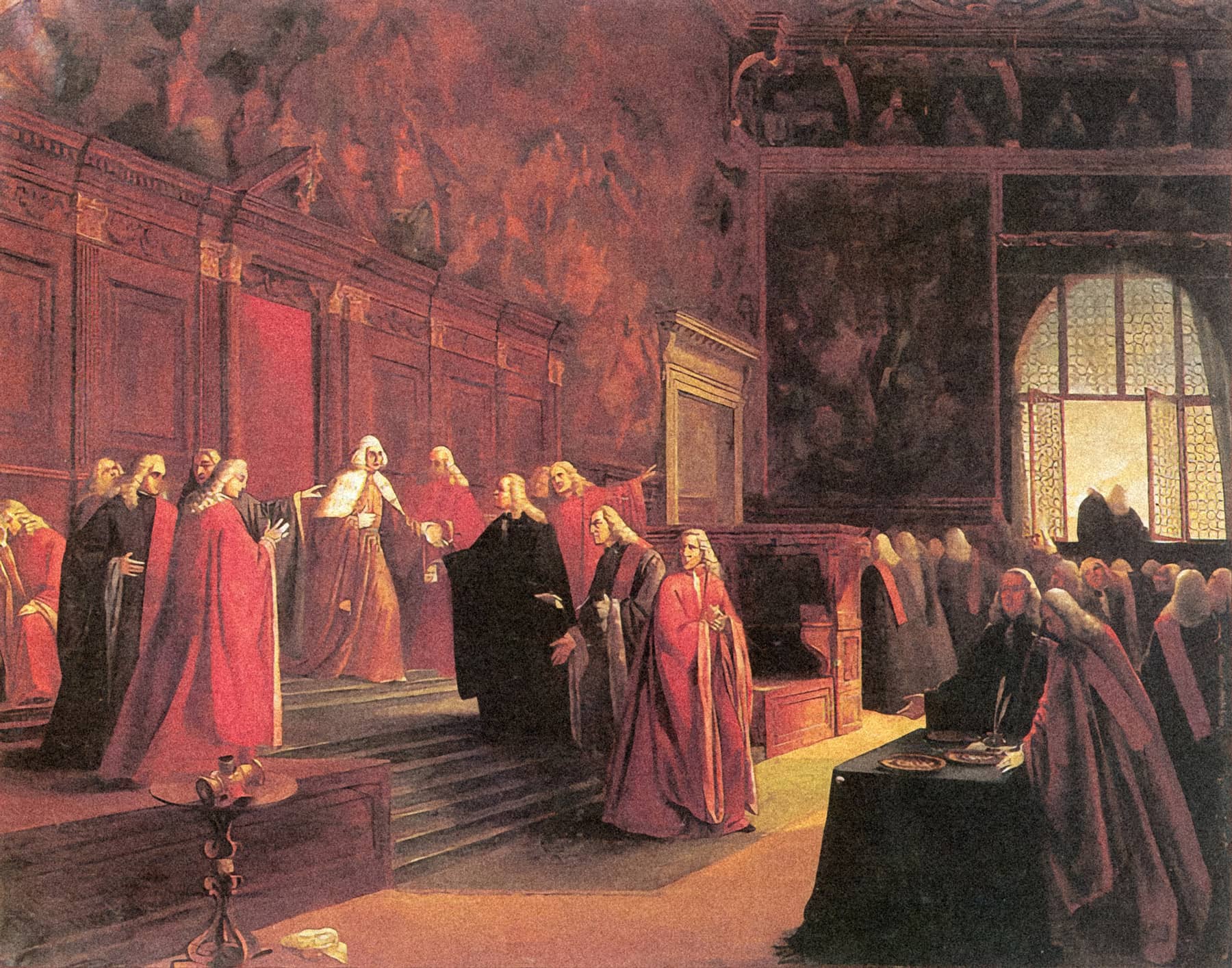 On 15 May of 1797 the Doge departed the Ducal Palace forever, and retired to his family’s residence. In the last decree of the old government, he announced the birth of the Provisional Municipality of Venice.

With the expansion of the Republic of Venice, her dominion was divided into three administrative regions commonly called Regiments. First, the Dogado, the small original metropolitan territories, substantially equated to a district of Venice and divided into regiments called districts. Second, the Stato da Mar, consisting in the maritime domains which included the islands of Crete and Cyprus. Third, the Domini di Terraferma on the Italian mainland. The provinces of the Stato da Mar and the Domini di Terraferma did not enjoy administrative uniformity, but substantially maintained the pre-Venetian political and legal systems, onto which the superior authority of the Rettori, the magistrates sent from Venice, was grafted. Above the rectors operated the Provveditori and the Provveditori General, especially for military tasks.
‍
Eventually, in 1797, the Republic of Venice lost its independence, and fell to Napoleon and the Austrian Hapsburg monarchy. In 1866 Venice became part of the Kingdom of Italy.